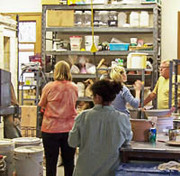 Comment by Cyndy Littleton on November 19, 2014 at 6:54pm
I like the glaze! It would be tough to replicate.

My scrap glaze comes from other complete glazes. Rinsing off dippers, buckets, brushes, washing out the inside of my spray booth, wiping pot feet, etc. No clay or isolated raw materials should be be included that would throw the mix out of the limits range of a normal cone 6 glaze in terms of the ratios of flux to refactory to glass formers. Below is my first scrap glaze (the gray green transparent). My second batch is less green, but otherwise similar. 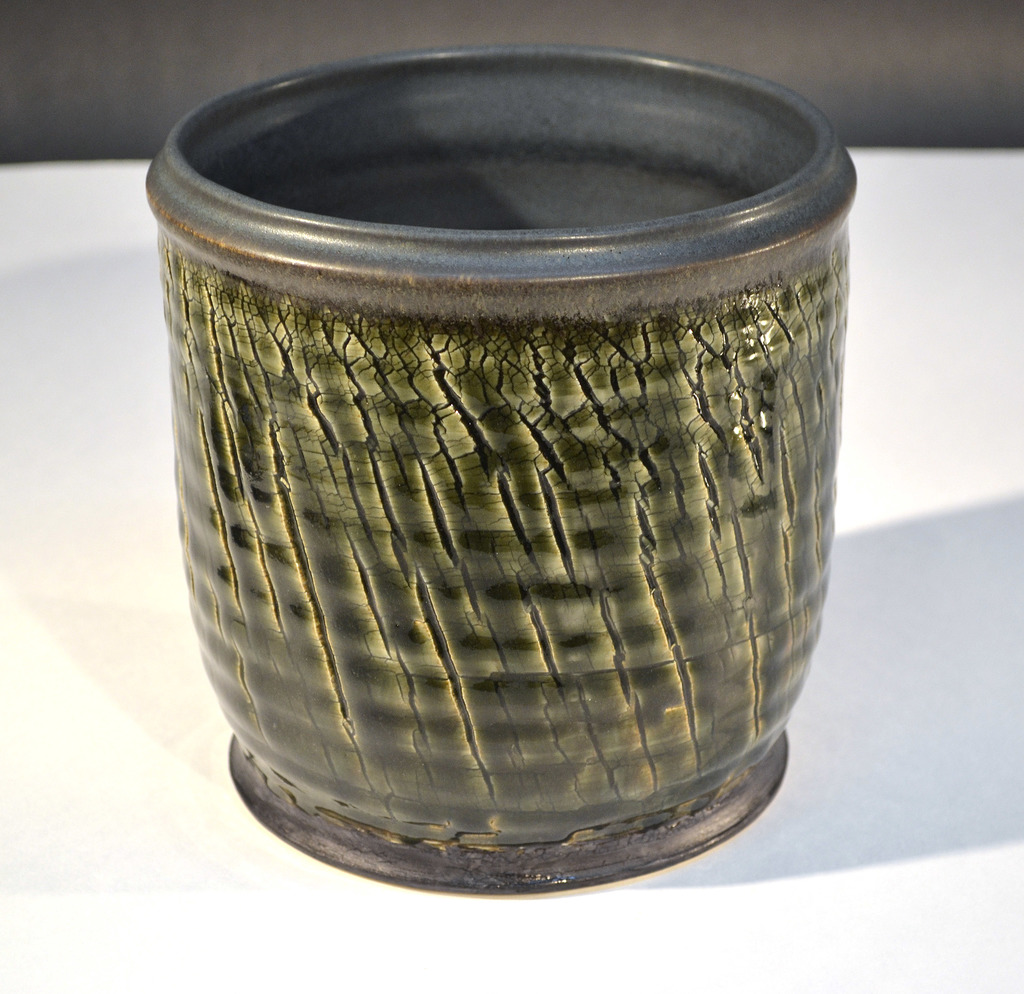 Our waste glaze always fires a frothy volcanic black which breaks on handling.  We likely have too many raw materials going into the slop tank.

I like! My students/clients know my "no guts no glory" outlook on experimenting with various glaze combinations. I will give it a go.

Cyndy, I highly recommend combining all your waste glaze until you have a full five gallons. Screen it, and then test it on some tiles alone, over, and under your regular base glazes. Chances are excellent that it will be a very stable gray, green or brown glaze. If it is good visually, have it tested for copper and cobalt leaching. If it isn't leaching high amounts of either of those, it probably won't leach much of anything else.  Your waste glaze can be a very attractive and inexpensive addition to your stock glazes. The only real problem is that the glaze will never be seen again after you use it up.

Great idea. I've inherited (via donations) several metals such as lead that I really have not interest in and wondered how to dispose of them.

Check with your solid waste hauler. The concentration of heavy metals in our clay and glaze sediment is allowed in our trash.  For us, those metals of interest are manganese with a tiny bit of barium and cadmium.

We pour the settled clay and glaze sediment into old cardboard boxes and toss them in the trash when they're dry.  Some people fire blocks of the glaze and clay mix in their kiln to make the heavy metal unavailable. It makes an unattractive glaze.

Thank you Norm! Some are old news, but all are greatly appreciated. I like the idea of settling tanks for the glaze. But how do you dispose of the heavy metals? I've got gallon size pickle jars filled with waste glaze and lined up in a storage room.

Cyndy - some fundamental guidelines for managing a studio. Hopefully everything I mention is old news.

1.)  Use big plastic tubs as settling tanks. Do not throw glaze or slip into the sink, garden, or gutter. It's not legal and it blocks drains. Heavy metals settle to the bottom of the settling tank.

3.) Use larger particle size silica products.  If you do purchase fine particle products like A-25 silica which is aerosolizable restrict it to an area where humans breath only with a respirator. Large particle 200 mesh silica doesn't melt as well, but this shouldn't pose a problem unless you're making making up glazes for temperatures lower than 012.

4.) Label glazes which are not food-safe.

1.) Training new people is your biggest job, so make learning your studio culture.

2.) People who won't or can't learn shouldn't be helping to operate a studio.

3.) Every potter knows at least 10 rules which are simply not true. With the internet available, rely on factual sources. There are also at least three right ways to do everything, so insisting on using only one of them is pointless.

1. Every glaze or underglaze you make will cost far less than buying them. Buy almost everything in 50 pound bags as the cost tumbles with volume.

3. Recycling clay. If you don't have a de-airing pug mill don't bother. If you do recycle clay, keep track of your time spent on a ledger and the quality defects created by recycled clay. After reviewing the ledger ask yourself if that time wouldn't be better spent working at McDonalds.

I was convinced of the desirability to replace elements and relays on a schedule, to reduce down time and failed firings, but experience showed me that was not the right solution for our kiln.

My advice is to get to know your kiln and learn how it fails, as each design is different.

We fire our kiln about four times a week, with about 45% of those firings being Cone 6.  Firing a kiln to Cone 04, it may take many years to see the wear and failures you get within a year firing to Cone 6. Fire to Cone 10 and you've reduced kiln and replacement part life by 75% compared with Cone 6.

We've had a computer controlled Cress E23 for four years which has crazy amounts of power per cubic foot. This means several heating elements have to fail before the kiln firing fails to stick to the scheduled ramps and halts with an Error. So how do we know when an element needs replacement?

Paper strips. We periodically stick little strips of paper onto each element to discover elements which need replacement. Some are impressed with multimeters but 1" strips of paper are dead simple and easy to read - they either burn within a couple of minutes after I turn on the kiln, or they don't. If all of the paper strips on heating elements powered by one power relay fail to burn, that power relay is out.

If your kiln firing fails because of the failure of a single heating element, your life will be considerably more annoying. In this case you may learn to use a multimeter to help predict imminent element failure by noting increased resistance levels. Yuck!

You'll probably also discover with time that some of the heating elements are far more prone to failure than others - and this depends entirely on the design of the kiln. Our bottom element is exposed to far more heat and fires more often, so fails faster than the two other identical elements in the middle and top. Our kiln also has a couple of shorter elements which seem to never fail. Any little splash of glaze on a heating element can kill a heating element on the first glaze firing, that's a wild-card, which led us to delete a couple of spitting glaze recipes.

Using a MAPP-gas torch to move sagging elements back in place lengthens the element life.  Moving the heating elements, either on purpose or accidentally, when they're not red hot ends their lifecycle within the next two firings. Yes someone actually did that for a while.

Why a yellow MAPP gas canister rather than a blue butane canister? Because the burner design for MAPP gas also burns upside-down - something you'll need to reach the lower elements. It also burns slightly hotter and possibly damages the Kanthal elements less, but that's a secondary issue.

After four years we've had one of the two power relays fail. Your kiln may be entirely different, and there are relays available with different levels of durability.

Our Type-K thermocouple failed after three years, which we replaced with a Type-S platinum with an allegedly longer lifespan, in addition to being far more accurate.

It goes without saying that it's a lot easier to not damage firebrick than it is to replace or repair them. We foolishly didn't choose the $350 all-stainless option when we bought our kiln, so we have been replacing each non-stainless part with a stainless steel version as they fail. The most recent replacement was the handle which corroded through. A nice polished stainless version at the hardware store cost $45.

If you've used a kiln sitter with the little match-stick cones, you know that introduces another entire layer of heat-work variability and firing unreliability.  I would never use another again. They can be easily replaced with a $650 computerized replacement part. How much is your time worth?