One unique feature of Stephen Hill's firing schedule is that he goes to someplace in ^ 5 then holds for up to an hour until the ^ 6 drops.  what is the point of this versus simply going to cone 6?

The soak at the top of any firing curve is to give the glaze a chance to develop -- to mix, to start crystallization, to finish gassing off, and to give blisters and pinholes that formed during the last temperature rise a chance to heal before they are frozen in situ. Any hold at the top of a firing curve will result in more heat work, and will raise the cone equivalent of that temperature. Thus you must stop rising lower than the cone you want to end at.

I certainly agree with all of the above. it seems curious to me that he is the only one of the big-name potters, that I'm aware of, that does a conspicuous soak at the top.

When validating our new platinum thermocouple with Witness Cones I fired the kiln without a hold at the peak temperature and without a slow-cool because I did not want the results affected by any additional heat work past the programmed firing.

While additional time spent at peak temperature does add somewhat to heat work, by Orton's definition, there is an absolute limit to this. No one can achieve the heat-work of Cone 12 by holding a kiln for several days or months at Cone 6.

The heat work created by firing to Cone 6 with a one hour hold, or so, is different in many ways to firing to Cone 7. The additional clay body densification achieved will be similar, but the effect on glazes will often be quite different. Many commercial or home made glazes become significantly more fluid at Cone 7 running onto the shelf, but they will not exhibit this run-off when fired to Cone 6 with an hour hold.

As a result, we merely program our kiln for the maturity cone of the clay and glaze we're using.  The reason we add a twenty minute hold at the top temperature is to allow glaze reactions to mature enough to eliminate pin-holing from off-gassing. I've not observed any practical result of the additional heat work which occurs during this hold.

Some glazes, like "Mastering Cone 6 Glazes" Waterfall glaze become a uniform unattractive brown when allowed to react too long in a temperature hold. The desired look of the glaze depends upon stopping the reaction at a certain point.

So a long temperature hold at the top temperature is not always desirable.  Applying his glazes over a flow-underglaze Stephen Hill needs a long hold at the peak temperature to give the glaze enough time to move over the ware.  This is a unique situation.

We have experienced a different type of pin-holing when fluorine containing glazes are combined with some white Cone 10 clays fired to Cone 6. The longer these glaze/clay combinations are fired, the more pinholes we get. There might be some amount of heat-work, or absolute temperature, which might finish this reaction but we have not found it. We simply avoid these glaze/clay combinations.

Crystallization of Cone 6 glazes doesn't begin until the temperature falls well below cone 6. A very slow-cool between 1,800 F and 1,500 F, which is a six hour time period with out firing schedule, might translate to some small amount of additional heat-work but it would be a small fraction of a one cone. I've read comments from some who think the slow-cooling recommended by "Mastering Cone 6 Glazes" or Stephen Hill is designed to create additional heat-work, but this is a fundamental misunderstanding of why the slow-cool or hold at the top temperature is added.

The longer a slow-cool is allowed to continue, either due to the use of dense traditional firebrick in the kiln or a computer controlled slow-cool on an electric kiln with soft firebrick, the more crystallization will occur. With many glazes the level of the fluid melt will fall below the top of the crystallized layer with an extended cool, typically resulting in an unattractive result. When I adjust this type of glaze for our very slow slow-cool, I add additional flux and silica typically by adding 10% to 20% of a very liquid Ferro Frit, such as 3134, or fluorine frits like 3269 or 5301.

Below are two "poster child" glazes I use to illustrate the effect of slow-cooling.

The first is Jayne Schatz Blue Matte cooled at the relatively fast 185 F per hour recommended by "Mastering Cone 6 Glazes" and on the right is our extremely slow 50 F per hour slow-cool. I much prefer the look on the right, so that's what we do.  This glaze recipe is available in our Insight-Live glaze database. 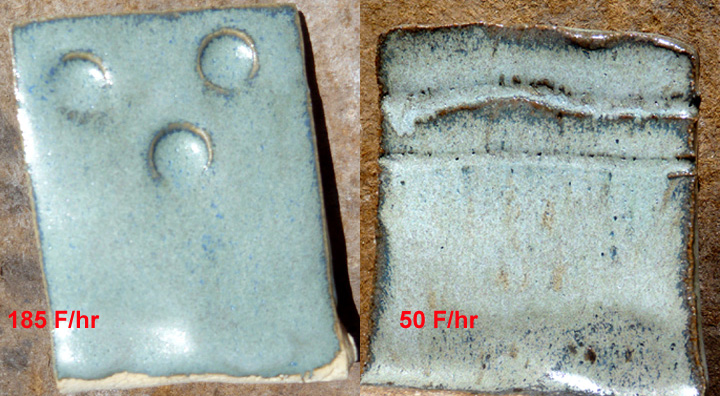 The second poster child glaze is Clear Base Blue, also in the Insight-Live database. This glaze illustrates what I consider over-crystallization as the fluid glass of the glaze is locked-up as a component of the crystals. Fast-cooled on the left and an unattractive slow-cool in the center.

To correct this undesirable result I added 10% Ferro Frit 3269 containing silica and a lot of flux, including the very active flux, fluorine.  In my estimation this extra frit combined with the very slow slow-cool produces a very attractive glaze, but completely different to the fast-cooled version.

When applied to white clay, a large percentage of the iron in a glaze will bind to the white clay, leaving significantly less iron in the glaze melt.  You can readily confirm this by snapping a test tile in half. You will clearly see the brown line of iron bound to the clay surface.

When an iron containing glaze is applied to a iron-saturated clay, the full amount of iron remains in the melt changing the color or increasing the gloss of the glaze, as occurs with the glaze Orange Street.

The photo below is the same glaze on the far right with 10% 3269, but applied to iron-rich Laguna Amador clay.  On this iron-rich brown clay the full amount of iron remains in the glaze and has overwhelmed the green and blue of the copper and cobalt colorants. 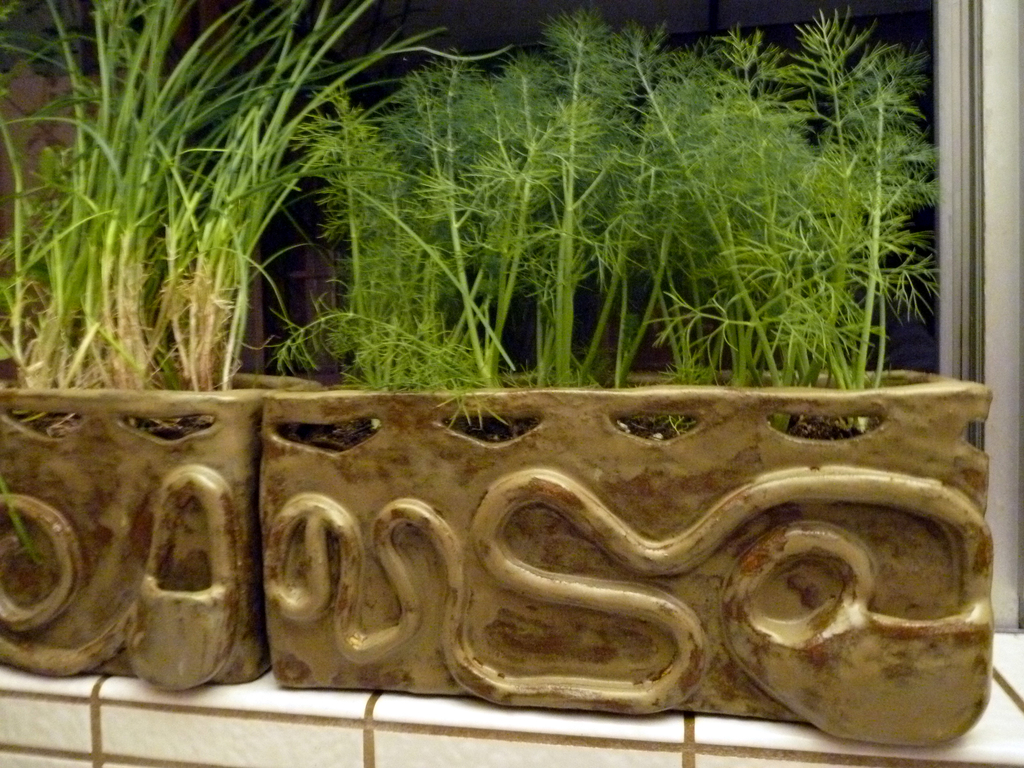