Testing Glazes for Durability, Fit, and Toxicity on Functional Ware

Testing glaze toxicity, fit, and durability can be a two tiered process.

You can run a number of tests at home with very limited equipment to pre-screen potential production glazes. While your results won't give you total certainty that a particular glaze or combination is safe, you can eliminate some of the more problematic glaze formulations, and save the cost of lab testing.

If your home testing indicates that a glaze (or combination) containing toxic metals is stable and durable, and you know you want to use it in the food and mouth contact areas of functional pottery, then it is only logical to have it leach tested by a certified lab. Taking that step will enable you peace of mind when you think about the people who use your ware.

Other possible areas of concern

It is no coincidence that so many questions are answered at digitalfire.com. Tony has amassed the web's most complete source of ceramic information. Many thanks, Tony.

Note: Liz's discussion was edited and expanded here to bring more information to the base topic, and encourage a wider response. G Lewter 3/12/2015

Alfred University will test. A few years ago they were charging $15 to test for each oxide you wanted tested. So if you just want to know if the copper addition, for instance is too high for your glaze base, they will just test the copper. I don't have a contact page or number but you can google either Alfred University of University of New York at Alfred N.Y and there should be enough information to email or make a call to get more information.

Questions have been raised in the studio I use about the food-safety of two glazes, Philly Green (with 25% strontium) and a temmoku glaze with barium (sorry, I don't have the recipe just now). Is the lemon test truly reliable for these two chemicals? I've not done this before.

Barium bearing glazes have largely fallen out of use by potters for any food contact surfaces. If you are going to use one in that way, you would be wise to have it lab-tested alone, and in the same combinations with other glazes that you plan to use.

I've not heard of strontium leaching being a major concern.

Digital fire has a good article on this subject at: http://digitalfire.com/4sight/education/are_your_glazes_food_safe_o...

and also on at-home testing at: http://digitalfire.com/4sight/tests/ceramic_test_glaze_leaching_tes..., from which I'm quoting two methods:

"Lemon Slice Test: Lemon juice is more acidic than water (actually it is even more acidic than vinegar). Place a lemon slice against a glazed surface and leave it in contact for several days. Make sure that it is in close contact with the surface and stays wet (put plastic wrap over it to keep it from drying out and a weight on top if needed). Look for differences in surface color, texture or character."

"Dishwasher Test: Take two identical items and put one in your cupboard and leave one in the dishwasher for two months." Then compare the two. With a stable glaze, the washed piece will not have changed in any noticeable way.

Thanks. I'm doing the lemon test even as we speak on one of my Philly Green-glazed pieces now.

Commenting on the home acid test ... I use it often and tell my classes that we can tell if a glaze is leaching but we cannot tell if it is not leaching. Only a lab can give more definite results. However the home acid test can certainly keep some unsafe or unstable glazes from being used on functional ware. I'm leaning more and more towards liner glazes for inside functional ware.

If a glaze is quite light colored or white it may be difficult to determine a difference in the glaze with the home acid test, so it could be a good idea to use the base recipe with more colorants, especially copper (which leaches more readily than others) to determine if the glaze is holding well.

Some glazes can be eroded by a strong base, but not a strong acid. People discover that in a dishwasher.

After reading articles in Digitalfire I was intrigued by an example of a "soluble glaze" Tony Hansen presented. A glassy glaze which was soluble in vinegar in spite of being fired to Cone 6, something which should be quite possible.

This was such a great teaching example I made up a batch and fired some test cups glazed with the "soluble glaze" and fired them to Cone 6 so everyone at our studio could learn from it.

What a surprise that was. We couldn't etch the glassy sheen off the glaze, or remove any weight from the test cups by soaking in vinegar for weeks, not even using vinegar heated in the miscrowave. Nor did filling the cups with lemon juice, hydrochloric acid, phosphoric acid or lye for several weeks or repeated dishwasher cycles affect the "soluble glaze". Chemically the glaze doesn't have enough alumina and silica relative to the high level of calcium and boron which the vinegar should disolve, so it shouldn't have been so resistant to erosion.

Obviously there's some factors which determine glaze leaching which are not very predictable.

Digitalfire does have an interesting essay about how  food-safe non-leaching glazes can sometimes be destabilized by coloring it with copper, as copper is quite reactive leaving pits in the glaze as the copper is removed.

A green mason stain can be produce much the same coloring without destabilizing the food-safe glaze into a leachable glaze.

Different types of chemical erosion of ceramic glazes and glass:

This is a simple Cone 06 nickel glaze I call Norm's Olive Speckle made by simply adding 10% nickel carbonate to Ferro Frit 5301 and suspending it with bentonite.

Fired to Cone 6 with a slow cool the crystals are under the glass, but it's still coded "Not Food Safe". Norm's "bad" glaze formulation that was etch resistant to acid and alkali may have derived its chemical stability from the large percentage of B2O3. Boron is just above Aluminum in the periodic table and diagonally up one and to the left one from silicon. The implication is that it has somewhat similar properties to both of them. In a glaze the B2O3 molecule, in addition to its commonly understood function as a flux, also may stabilize like alumina, and form a glass like SiO2.

I suspect the glaze would fare very poorly in Tony's drywall screw or hacksaw blade scratch test as it is likely quite soft.

I think a lot of what we are trying to do is recreate a layer of natural gemstones on ceramic.

The unexpected interactions are interesting.  One of Tony Hansen's mongraphs on leaching says that many non-leaching leaded-glazes, leach lead rather readily after boron is added to the leaded-glaze. The boron must have a stronger bonding capacity with alumina than lead does. Leaded glazes which leach lead can usually be rendered safe by increasing the percentage of alumina.

I think it might be possible the high level of Boron in the "vinegar soluble glaze" in the long Cone 6 firing might even have allowed some of the clay body to contribute alumina and silica to the glaze, changing the intended chemistry. But that's just a guess. 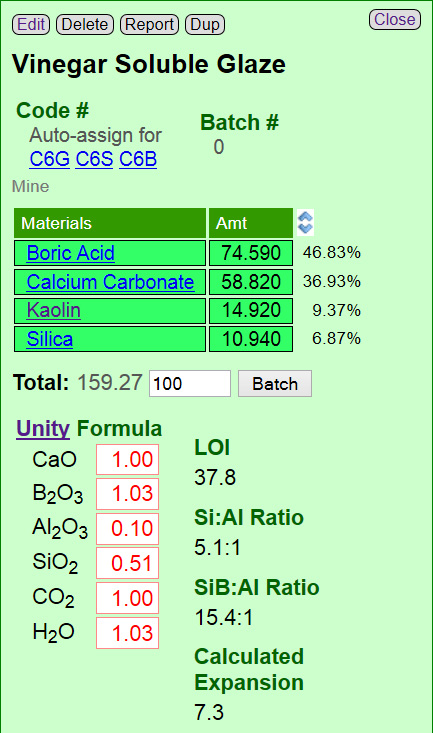 Phosphate (PO4) is also a silica replacement and is used to make different types of optical glass, usually added as Iron Phosphate, which is supposedly the same shape as Silica so can replace it in a Silica matrix, sometimes with the addition of lead is added as a flux to make the Iron Phosphate and alumina create a lower melting temperature.

The Dept of Energy has steadily progressed with plans to mix radioactive waste with iron phosphate glass frit melted into ingots to make nuclear waste resistant to water erosion.

It's interesting to see how iron phosphate, used in place of silica, changes red iron glazes. 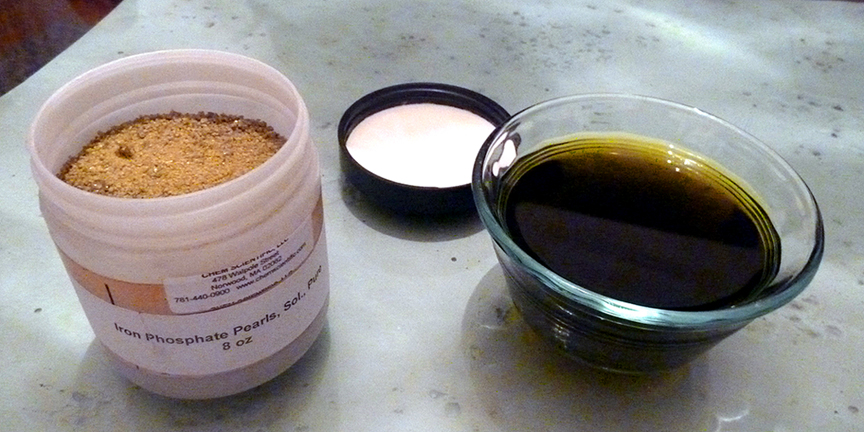 I think I'll try out the Vinegar Soluble Glaze with these raw materials instead.