My First Attempt at Spraying Glaze

I have been a hobby potter for about 18 years.  For 10 of those years I have been visually impaired.  Making things didn’t suffer much when I lost my good sight, but glazing became a recurring nightmare.  I tried brushing glaze and couldn’t tell how thick I was applying glaze or see brush marks in the glaze.  Dipping pots is OK, but everything looks commercial if a pot is dunked in a single glaze and I cannot tell when I’ve missed a place when I glaze.  Also, I like making big pots and it takes a lot of glaze and a strong arm to dip a big piece.  So, I decided to give applying glaze with a sprayer.

I opened the kiln this morning to find out how my first attempt at glazing with a sprayer worked.  Several lessons were learned, but first let me tell you about the process.

I bought a “Critter” sprayer, years ago, but never used it because I didn’t have a compressor.  It was a classic case of putting the cart before the horse.  Four months ago I ordered a Central Pneumatic compressor from Harbor Freight.  I then put together a rudimentary spray booth out of a large cardboard box and a utility sink.  The Critter is a siphon feed sprayer and has a fairly large pattern.  Only the liquid tube is adjustable.

I had several dark clay pots (Highwater Clay’s Red Rock) and one pot made with Highwater’s Little Loafer.  All had been bisque fired, and the white pot had some work with sgrafitto that I wasn’t happy with, so I put a bit of Archie Bray’s “sticks to anything” white slip on that pot with a rib to confuse the pattern of the sgrafitto and let that dry well.  It did not fall off during either drying or firing.

I used 3 glazes, Bone from MC6, Variegated Slate Blue-Green (modified from MC6) and Sankey’s Iron Red.  I also sprayed one small pot with Waterfall Brown and dipped the rim of one pot in Frasca Ash Glaze.

The firing schedule was,

The kiln fired successfully in 14 hours and change.

Before discussing findings you should know a little about my visual impairment. I have little depth perception and depend on side lighting and shadow to illuminate texture and I have little perception of color.  I cannot look through peep holes and see the cones during firing.  So, I have to trust the digital timer and see whether the right cone fell. 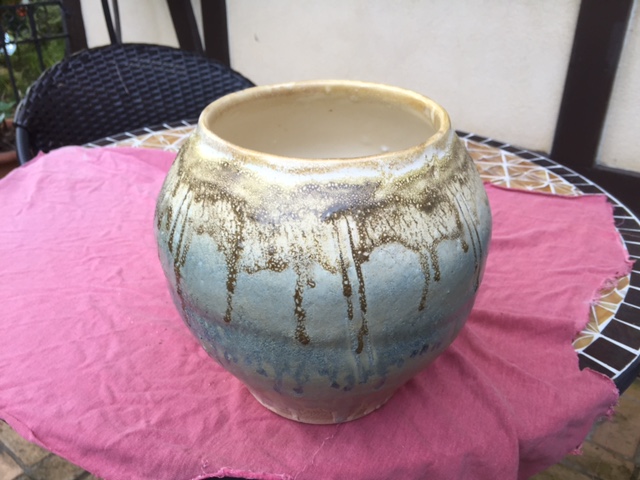 Bottom of pot is VSB and top is Iron Red 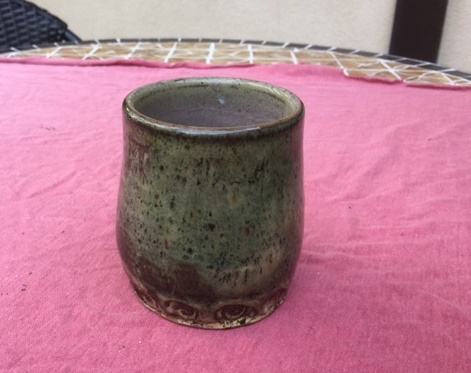 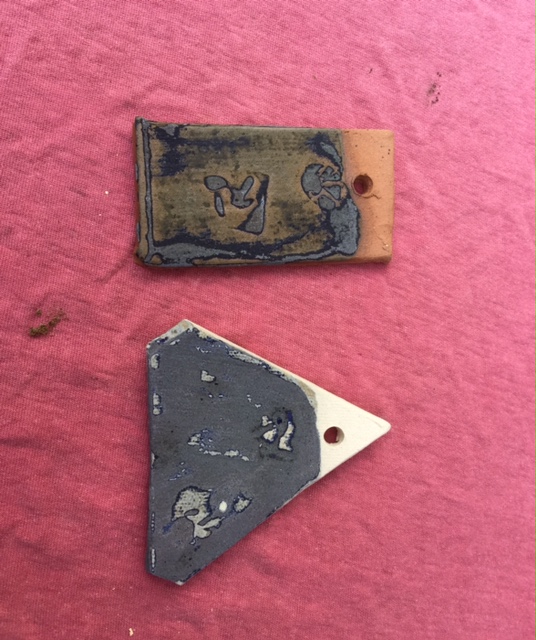 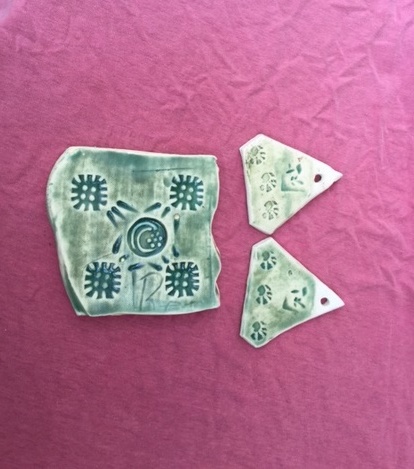 Zam Celadon. Dipped and brushed on small tiles.  Over black underglaze that was sponged back on the larger piece.

Bone and VSB performed as expected.  The Iron Red was an ugly brown.  The Waterfall Brown was brown where thicker under the rim and in stamped texture on the base and was what my wife describes as “moss green” on the thinner areas.  The Frasca Wood Ash did not melt and did not run.  Furthermore it crawled in areas, especially on the white test tile.

I glazed the lower portions of pots first and got more overspray onto the top portion of the pots than I realized and glazes that were applied to the tops ran and did not cover well.  Spray each glazed area and let dry before applying another.

Should I fire to a higher temperature?  The 6 cone bent.  There seemed to be a good melt with everything but the wood ash.  I need to read about Frasca Wood Ash glaze.  Maybe it is a cone 10 glaze.

I had several test tiles in the firing.  Zam Celadon looks great dipped or brushed.  I really like the look where it was over black underglaze that had been sponged off leaving it in only depressed areas of texture. Try spraying ZC on textured pots.

Try another ash glaze.  Maybe tweak the Frasca by adding flux?  I was surprised that it is so dark and the little bit of cobalt that was added was not visible to me.  The ash source is from the neighbor’s wood stove.  I think it is all from hardwood, mostly red oak.  I have about 15 pounds of sifted ash.  I need to find something to do with it.

We have many inexpensive insoluble materials which can add CaO Calcium Oxide to a glaze or clay, such as Whiting (Calcium Carbonate).

But the "Calcium Phosphate" materials are the only insoluble and inexpensive way to add P2O5 Phosphorous Pentoxide.

Many guides about Red Iron Oxide glazes and my own experience indicate that Phosphorous P2O5 helps support the Red color, while Calcium CaO hinders or hides the red color.

One source is George Lewter's essay on creating Red in iron oxide glazes.

I prefer a DiCalcium Phosphate which provides the highest ratio of Phosphorous to Calcium.

If you ever want the exact chemistry of Bone Ash (calcined cow bones), simply combine:

Here are some of your "calcium phosphate" choices from Digitalfire:

I have some synthetic RIO on the way from U.S.Pigment and plan to try Orange Street next glaze firing.  This has been very helpful.

I'm not going to pour my wood ash on the irises quite yet.  The last time I bought bone ash I was offered synthetic bone ash and stuck with natural.  Any opinions there?

Finding the MSDS (Material safety Disclosure Sheet) is pretty easy with Google, but I can't find one for Ceramic Supply Inc.

Saed Abbas at US Pigment sells a Chinese knock-off with larger particle size which I prefer. He doesn't have the MSDS online but he emailed it to me.

I forget where I got this photo, showing the effect of a 3 hour cooling hold at 1,850 F if you fired above Cone 6 and degraded your red iron oxide into black iron oxide. It could be George Lewter's or maybe from Digitalfire.

The bottom line is recrystallizing red iron oxide in an electric kiln is costly. Better to start with pure red iron oxide and fire no hotter than cone 6. 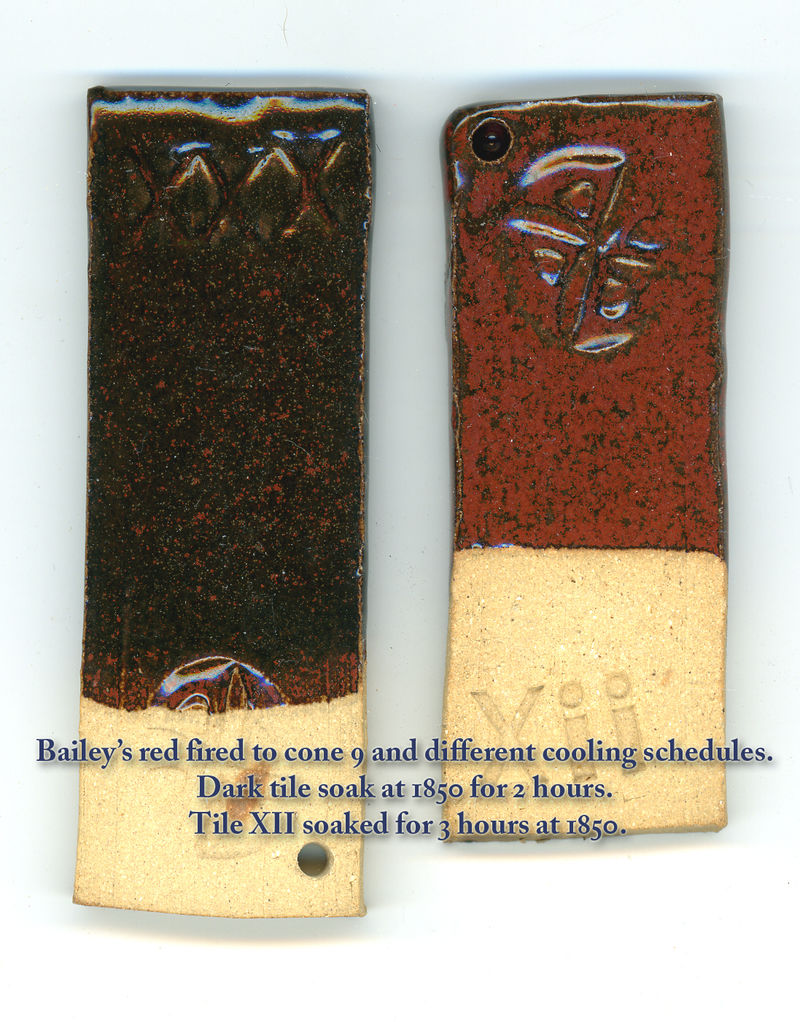 I was making up a couple glazes last night and noticed that I had the Iron Precipitate from Standard as well as the High Purity from Ceramic Supply.  Are these both the Bayferrox 140 or are they different?  To my eye the High Purity is more red than the precipitate, but I was just making a Floating Blue so I just used the the precipitate.  I also have some RIO from New Mexico clay that is more purple, but I'll have to check the bag to see what it is labeled as.  It might even be labeled as Crocus Martis although it can't be the real deal.  jhp

Some Brown iron oxides are a mixture of red and black, so I don't know if adding black iron oxide would be a successful approach to adding a brown break in glaze flow - but it's the first thing I'd try.

The original Orange Street recipe called for red iron oxide and crocus martis, a type of iron ore which has not been available for decades. The yellow iron oxide does make the glaze more orange.

The Magruder Red tile I posted in my prior note is actually a variation where I replaced the bone ash with Iron Phosphate, which is itself a type of glass.  As a result the glaze breaks clear.  The phosphorous in bone ash helps the red iron color, but calcium also in bone ash inhibits the red and encourages brown.

This is the original recipe Magruder Red tile which has a more brownish break like the Orange Street.  Bear in mind too that these glaze tiles are very white New Zealand Frost porcelain. 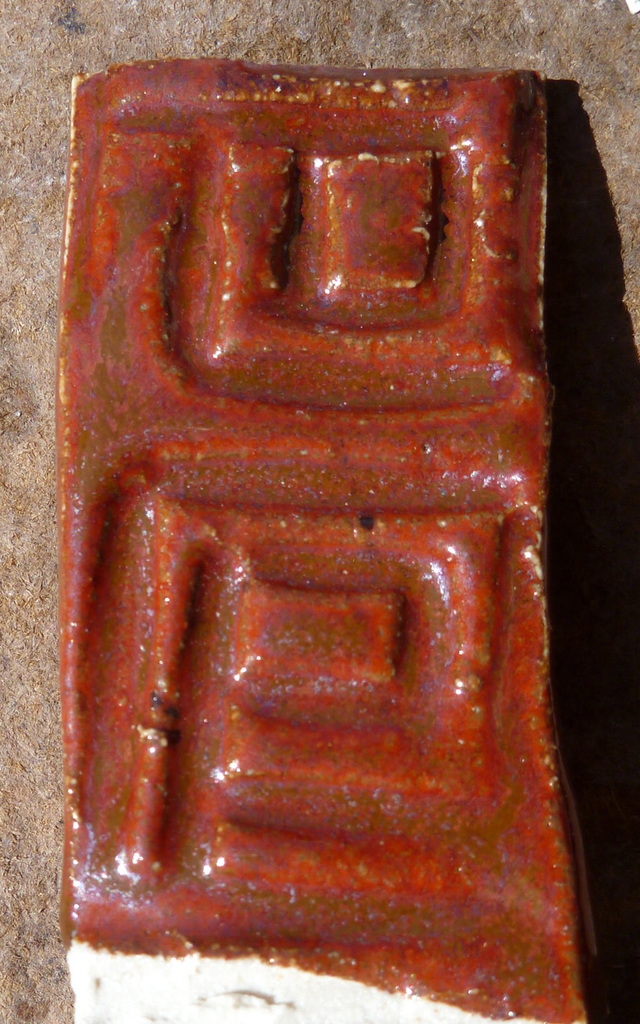 This is very helpful information.  I noticed that neither the Orange Street nor the Magruder Red were black where the thickness was different.  Is that something that you give up with a synthetic pigment?

A pure man-made red iron oxide is essential to creating a red color at cone 6 and below, because red iron oxide at these temperatures is like a refractory mason stain. So what you start with is what you end up with.

Synthetic red iron oxide is sold as a red tint for paint, ink, cement and plastics.  Large particle size is better for firing in ceramic glazes, such as Bayferrox 140.  You can purchase "red iron oxide" in a variety or colors, red, purple, or orange.

I have found "Orange Street" and "Magruder Red" to both be very reliable red iron oxide glazes.  All of this advice is found in the Insight-Live glaze database.

Click on this photo twice to enlarge to full-size for easy reading.

Wood Ash: I have not found "wood ash" to make reliable glazes at cone 6 without adding other fluxes.  With other added flux these glazes are usually title "Fake Wood Ash" glazes and are reliable at cone 6.  Wood ash does make great plant fertilizer though. 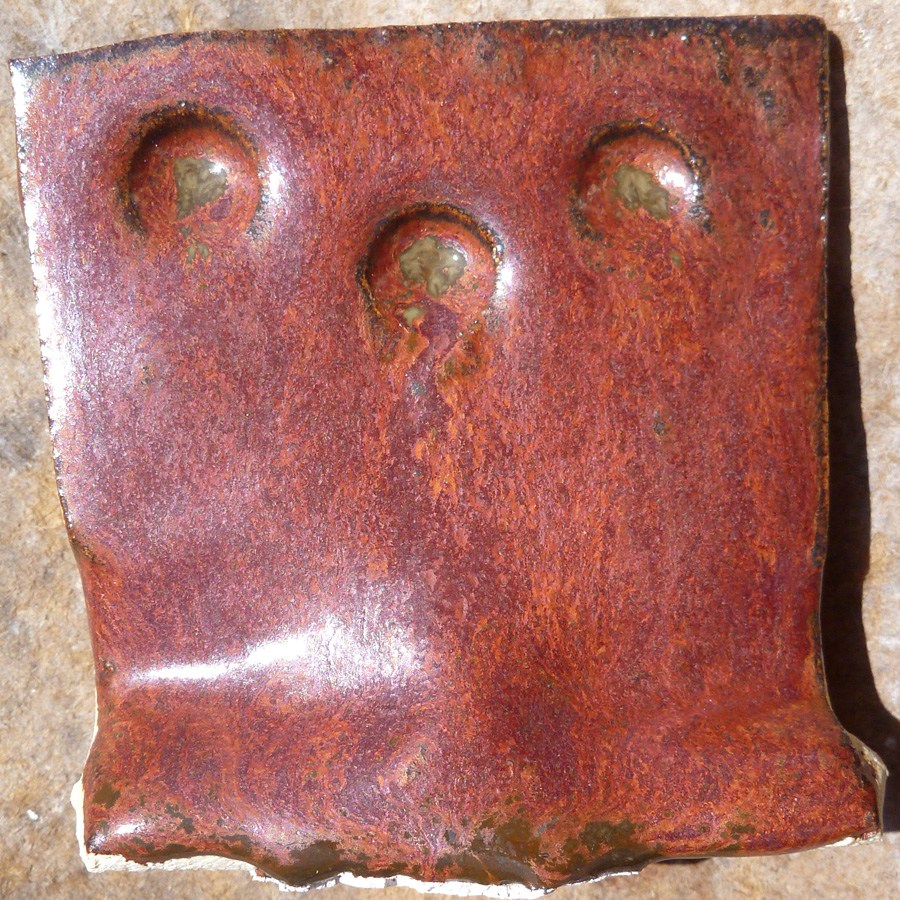 Magruder Red with Iron Phosphate replacing all of the weight of the Bone Ash and some of the Iron Oxide. This significantly reduces the Calcium content.  Without the calcium to semi-matte the glaze, you clearly see red iron oxide particles in a clear glaze. 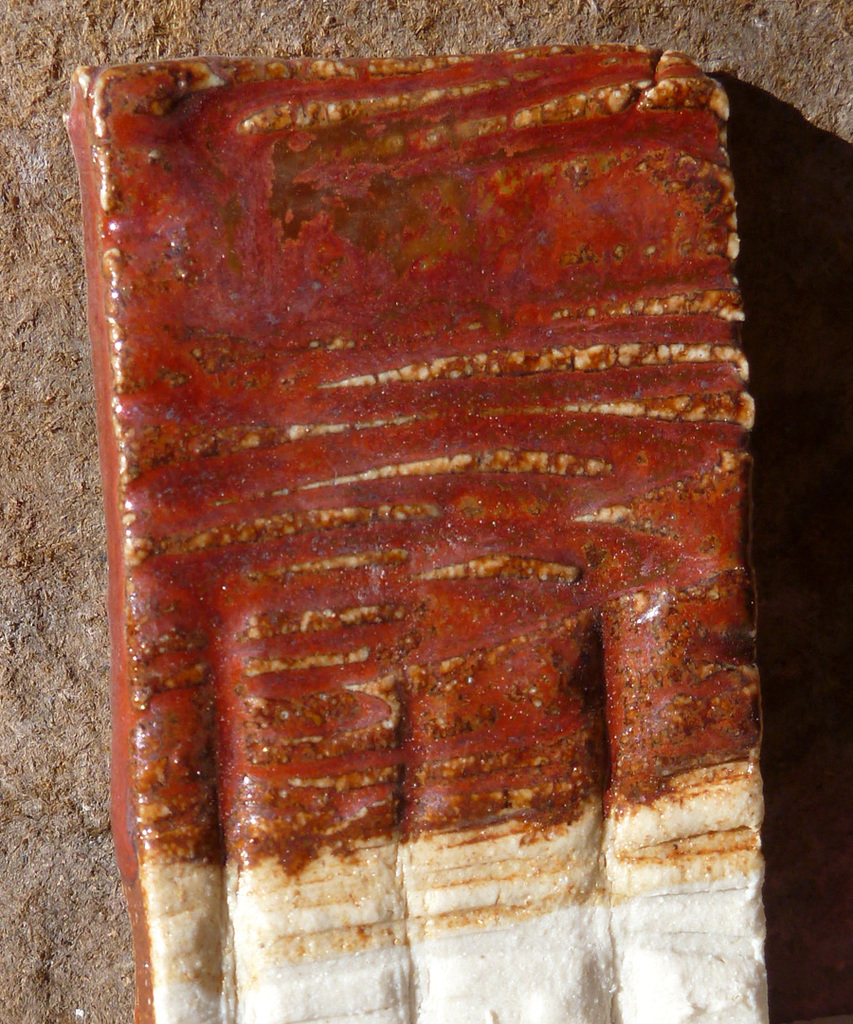 This is also my first attempt at adding a blog post here.  There are a few things that need editing, but basically it is OK.  Any comments - don't worry about hurting my feelings - are welcome.  This is cone 6: 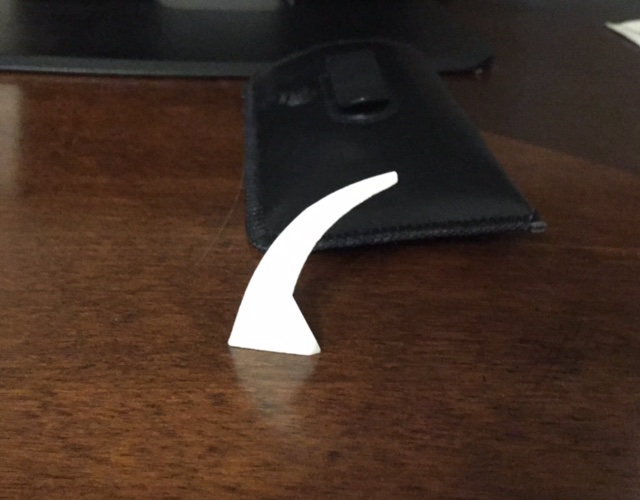