I had intended to post frequently during the retreat, but we stayed so busy with our activities that I kept putting it off. Then suddenly, it was over. The Gallery Lodge in Kasilof, Alaska was a magnificent location for our event, and the accommodations were first class. 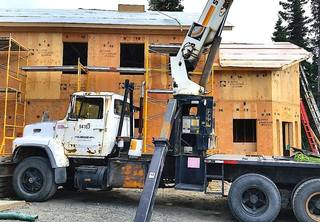 Dot was in the throes of building a studio on the grounds, and had much pottery equipment and supplies stashed in the large garage under the main lodge building. The studio is being built by a family of friends of Dot and Bob. Two of them, Sarah and Jessie are mother and daughter. 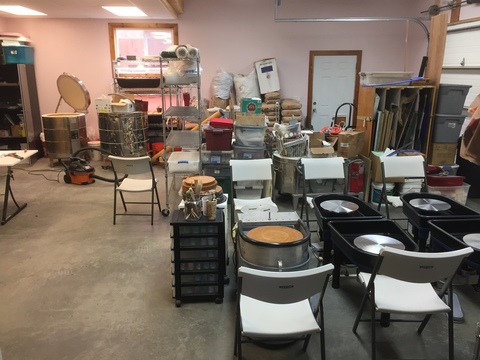 I arrived two days ahead of the retreat, and assisted with transforming the garage into a temporary, working studio. We unboxed 4 new Skutt Thomas Stuart wheels to go along with an older Robert Brent, and a giant Shimpo-like Frankenwheel (that nobody used). I installed my old Vulcan/Orton kiln controller on a 17" Paragon electric kiln and got it working. We also got a 23" Skutt manual kiln connected and tested, so we had two kilns available for bisque firing our creations in preparation for the final day's raku event. 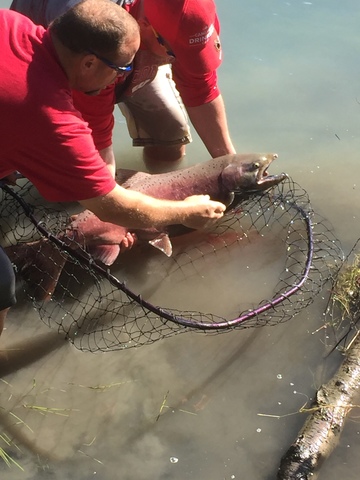 On the 14th, one of Dot and Bob May's guests, not connected with our event, caught and released this king salmon down on the lodge's river frontage. 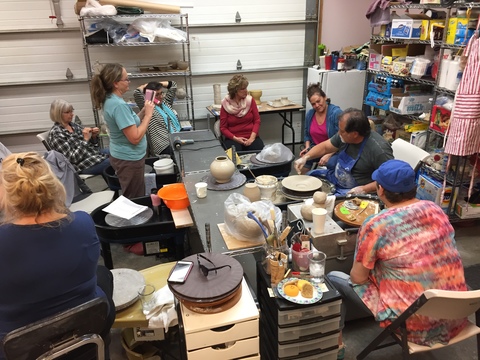 Our people arrived the afternoon of the 15th and were all amazed by the beauty of the environment and the lodge. Everyone settled in and several got started with their clay creations right off. Most evenings we had demonstrations by our attendees, showing their skills with various techniques and processes. We followed them with Happy Hours, and then dinners prepared by us, or by Sarah and her daughter Jessie, who took off their hard hats and demonstrated their mastery of cooking.

Several of Dot's incredibly versatile construction crew also changed hats and helped us build two raku kilns, while the attendees were making their pieces for raku. 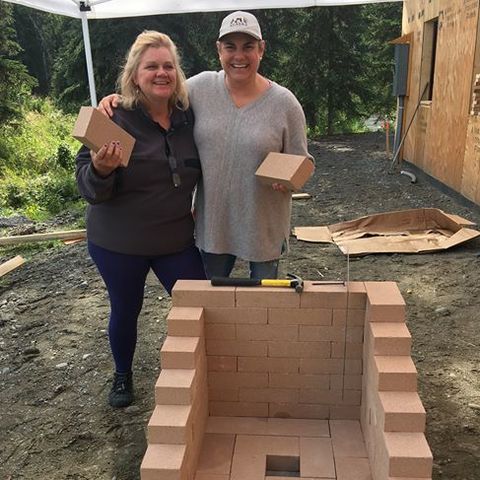 Many thanks to Jon Higuchi in particular for lending a hand and guidance in the kiln building process, but everyone chipped in according to their abilities and available time. Here we see Cathleen Sullivan and Shari Herling helping out with the brick kiln.We ran a little short of kaowool on the expanded metal shelled kiln, and just used the other brick and fiber kiln for the raku firing. Cathleen Sullivan was a strong organizing force for the whole event, and especially our smaller splinter group who followed up the claycation with a three day trip to Denali.

Various groupings of our people took off on excursions as they desired during the 1 week retreat. Some did this in the days before the start of the retreat, and they spent more time in the studio. Five of us went halibut fishing on day 4 and had good success. Here is Sharon with one of her halibut. The second image is Sharon and I posing with the catch for all five of us. On day 5 Sharon and I drove to Seward and went on the Kenai Fjords Glacier and wildlife tour. We saw Orcas, a Humpback whale, harbor seals, Stellar sea lions, many birds, and the Holgate Glacier flowing down to the sea. You can just see an orca between the two boats in the 4th picture. 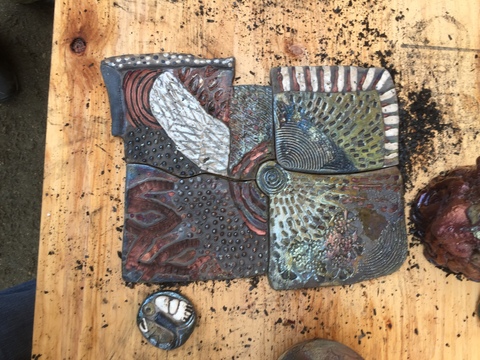 On day 6 all our pieces were out of the bisque kilns and that day and the next morning were devoted to glazing. We got started with the raku firing about noon with a 40 minute heat up on the first load, and then we were able to do complete cycles every half hour. We got finished around 4:30 with results varying from total destruction to exquisite. 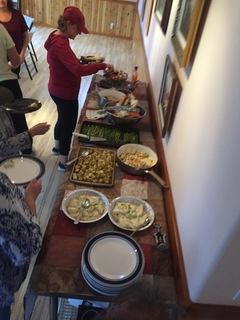 Our people spent the evening packing their pieces and luggage in preparation for leaving the next morning. Our last event was a fabulous Alaska dinner prepared by Sarah and Jessie. There was Alaska shrimp, scallops, halibut, king crab, slivers of marinated moose steak, and bear meatballs. Oh my!

It was all delicious! 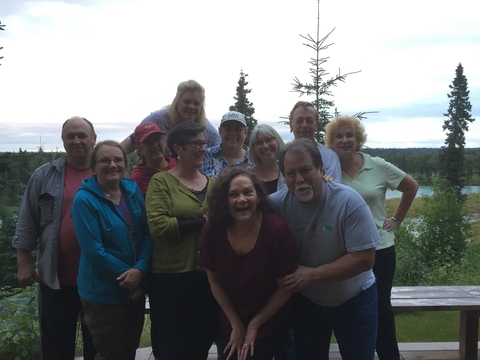 We had just enough light after dinner for a final group photo on the deck overlooking the river, and then spent the rest of the final evening savoring all that we had experienced.

Thank you to George Lewter for making this our first unconference-like claycation.  It was great!  Thank you to hosts Dot and Bob of the Gallery Lodge in Kasilof, Alaska: You two are amazing folks!  Dot, you are truly a renaissance woman!  I learned from you both to reach high and far and wide.  It's obviously all possible.  I cannot wait to see the Gallery Lodge's completed studio next summer!