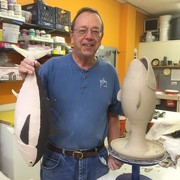 Following is an extract from John Sankey's Website with detailed instructions on achieving iron reds.

Red iron oxide Fe2O3 decomposes to iron monoxide FeO above 1000°C even in oxidising environments. Iron red is produced by a surface growth of columnar crystals of Fe2O3. Best reds are obtained by a fast cool through the temperature range above 1000°C, where black FeO tends to form crystals, to about 950°C where growth of red Fe2O3 crystals is optimised. Oxygen is required for this phase. Holding the temperature at 950°C for about an hour produces the maximum coverage of iron crystals and best red colour. The colour deteriorates with holds much longer than that, tending towards rust brown.


The more calcium there is in an iron glaze, the more difficult it is to obtain a good red, however some calcium is required to get red from iron. To get a tomato red also requires phosphorus; the red becomes more orange when magnesium is added to these two. The best iron reds in oxidation firing are obtained with about 0.10 molar CaO, 0.03-0.06 MgO, 0.01-0.02 P2O5 and 0.08-0.12 FeO.

Colours reported
Black, tomato to rust red to muddy brown with green, honey, rust, rarely blue nuances are reported in the literature. I have seen them all in my tests. I have only seen blues as crust-like surface components; if they are crystalline, the crystals are to small to see at 100x. I have never seen yellows or greens as a surface component, only as body. Reds seem to appear solely as a crystalline surface layer.

Thickness of application
This is often mentioned as a major determining factor in colour of red iron glazes. In my own work, I have found that a minumum thickness of about 50 µm is required.

Cooling temperature
Cooling schedule is known to be important. Refiring to cone 04 is often recommended to improve the red. Murrow (Ceramics Monthly Sept 2001) found that shino glazes turned red only below 982°C. Marians (Ceramics Monthly June/July 2007) found that temperature holds between 980°C and 870°C during the cooling cycle were critical to the development of red in her iron glaze. She saw three components, one believed to be iron-rich and two silica-rich, at low magnification. My own work confirms these findings, that holds at 950°C for an hour during cooling produce the best reds.

Colour analysis
Murrow&Vandiver (noted in Ceramics Monthly Sept 2001) found that the red colour of shino glazes came from a surface layer of ferric microcrystals about 20 µm thick. Under this layer, the glaze was white. My collaboration with John Stirling found that in iron glazes the surface is iron sesquioxide (Fe2O3) while deeper iron is iron monoxide (FeO). Park&Lee (J.Ceram.Soc.Japan 113(1314):161-165 2005) found that in high magnesia glazes the red colour is magnesioferrite MgO.Fe2O3.

Calcia
Cardew (Pioneer Pottery) states that alkali earths must be minimised for an iron red, that even 0.2 calcia will turn an iron glaze brown, and proposes a special frit to this end. My work confirms this for calcia.

Phosphorus
Bone ash is reported by many to make more reliable reds; some use ferric phosphate instead of red iron oxide and the bone ash (which contains a lot of calcia).

Boron
Hamer&Hamer (The Potter's Dictionary) mention that boron combined with small amounts of iron produce blue, but give no details. Rhodes (Glazes for the Potter) mentions blue from iron and boron; again no details. Obstler (Out of the Earth, Into the Fire) mentions that boron increases green in iron celadons; no details given. Hesselberth&Roy's Waterfall Brown (Mastering Cone 6 Glazes) obtains green from iron; it has 50% more boron than usual formulations, also more soda. True boron iron greens seem to require the near-absence of calcia, which can only be achieved with frits since natural borates are half calcia.

Titania
Weyl (Coloured Glasses) notes that iron is green when it is a network-modifier (equivalent of interstitial atoms in crystals), and that titania moves it to brown by shifting it to a network former (the equivalent of taking part in a crystal lattice). 4% titania achieved this in my experiments with the calcium iron glaze below.

Migration of iron
There are two unpublished reports of sub-surface iron migrating to the surface of glazes. Ron Roy has noticed this under strong reduction, but not in oxidation under otherwise identical conditions. Hank Murrow believes that fluorine in a glaze assists migration of iron to the surface and uses a percent or less cryolite in his glazes to achieve this.

To investigate the interaction of calcia, magnesia and phosphorus with iron in oxidising fired glazes, a series of mixes were made. A base glaze contained none of any of the three oxides under study, and one glaze each was made up similar to the composition of the base glaze, but with a large quantity of each of the oxides in turn. The target analysis for each was 3.5 Seger SiO2, 0.4 Al2O3 and 0.25 B2O3 (B2O3 and FeO omitted from Seger ratios).

Since the potassium and magnesium salts are hygroscopic (magnesium sulphate particularly so), each of these was baked at 220°C until anhydrous before weighing. Each glaze mix was then ground in a ball mill until uniformly fine. An attempt was made to use a 200 mesh seive on the dry mixes, but the hygroscopic-powered clumping of the soluble salts made that impractical - lumps had to be taken out after mixing with the oil.

Each tile glaze was made with four 1/4 tsp portions (1 tsp=5 ml) of dry material, using a precision stainless steel measure, then mixed with 3/4 tsp corn oil. (Water could not be used due to the soluble salts required to separate the oxides.) They were fired to 1290°C (cone 10), cooled to 950°C, then held there for 1 hr.

Since the best results were obtained with the maximum amount of phosphorus available from these mixes, and calcium was shown to be required, a supplementary mix was made up using bone ash (which contains calcium) to obtain larger amounts of phosphorus. Finally, the ratio that gave the best colour response was tested with 0-25% added red iron oxide. Some of the 54 test tiles are shown at right. Although not exactly decorative, they show several useful results for oxidation firing above 1000°C:

I have located only one phosphorus-iron mineral that is red: Simferite Li(Mg,Fe+++,Mn+++)2(PO4), which is not a player since none of my test series contained lithia. Park&Lee identified a magnesium-iron compound as their red. However, they seem to have concluded that the role of phosphorus is to tie up calcia so it doesn't interfere with the formation of magnesioferrite. It can't be as simple as that, since I got zero red from any glaze that did not contain calcia, and only a trace of very dark red on glazes that contained calcia but no phosphorus.

My current working hypothesis is that a calcium-phorphorus compound acts as a promotor (perhaps catalyst) for the oxidation of FeO to Fe2O3. It is possible that the two instead tie up something else that inhibits the oxidation, but this seems less likely.

Notes:
The tests were originaly planned for cone 6 and boron added that is usually sufficient for it. Although the magnesium mix melted at cone 6, all mixtures with it turned viscous and foamy as soon as they melted. Cone 10, the maximum for my kiln, helped with some, but was still inadequate for a few.
Every stray cat in the neighbourhood was attracted to the kiln outside air vent by the smell of the corn oil!


All materials presented on my site, except those specifically credited to other authors, are Copyright © John Sankey, 1939-2008, under the Berne convention, solely in order to protect the right of all to continue to use them freely. Anyone may copy, link to, or distribute any of them as much as they wish, as long as this notice of copyright and permission to further copy is distributed with all copies. That's the only restriction I put on them - that they remain absolutely free to all. No one may restrict their further use in any way, by collection copyright, physical copy prevention, or any other means. The courtesy of a reference link or credit is always appreciated. John Sankey

In the March 2011 issue of Ceramics Monthly was great 2-page article about iron compounds, which is viewable online.  It has a chart of different iron sources, variations, characteristics, and uses.  The row concerning red iron had condensed data that I've been looking for.

Comment by George Lewter on March 16, 2010 at 10:47pm
My experience with C Harris temoku is similar. I like it as a mottled warm red on Laguna b-mix 5, but over Laguna's #80 stoneware which is a darker brown C Harris variegates with stronger red flecked with darker colors of brown, blue, and black, and it breaks the darker colors over rims and edges. I like it better over the darker body.

Comment by George Lewter on March 8, 2010 at 10:07pm
I believe I did the recommended cooling -- rapid cool from max temp down to 950 deg C and 1 hour hold there followed by turning off the kiln.

Comment by George Lewter on March 8, 2010 at 2:36pm
I too got only a slightly reddish brown from the Sankey recipe.

Comment by VicsArt on January 24, 2010 at 5:31pm
Many thanks for your kind response. I will look into the C Harris Temoku recipe you mention. I would be tempted to try stains also as I see so many references to them on american sites, but I have not yet found a UK supplier for them. I am only just beginning to learn to mix glazes so there is a very long learning curve ahead! Thanks again,

Comment by George Lewter on January 24, 2010 at 2:47pm
I think your best bet for an iron red is with the C Harris Temoku recipe that is posted a couple of places on this site. (Use the search box at the upper right of the screen.) That glaze is possibly not a true "saturated" iron red as Sankey speaks of, but I believe it is forming the same red crystals. It is by far the most reliable of 5 or 6 iron reds I have tried, and when it doesn't turn red, it is still a pretty nice, defect-free brown, when compared to the other iron reds that don't turn red. The only way I know to get red consistentently is to use glazes with encapsulated stains. Because of the expense of the stains, I have chosen to pursue the iron reds.

In your situation, the stain based glazes may be the way to go. You can either use mixed glazes or add the stain of your choice to a clear base glaze you mix yourself. It usually takes upwards of 10% stain to get a glaze to have an intense color. Some glaze components are not compatible with some stains and will cause the color to fail, but the stain manufacturers (such as Mason) list the problem materials on their website and with their literature. Good Luck!

Comment by VicsArt on January 19, 2010 at 8:36pm
I love the Sankey Iron Red glaze effect you have here. The technical expertise is also incredible, so much so that I feel I need to apologise in advance for a "dummy question". I only have access to a community kiln - where cone 6 firings are the norm. I have no control over the soak period and am pretty ignorant with regard to firing processes. Any chance that this glaze would hold up and show its wonderful tones in the circumstances? I'm guessing I will be told to test it - but then, the appeal of this site is that just maybe one can reduce the learning curve by benefiting from the experience of others! Also, I assume that all the consituents of the glaze are food safe if you have chosen the glaze for your dinner service - but maybe there is some ambiguity here. Hope you can tolerate the questions from a relative novice - I seem to be having a lot of difficulty in getting glaze results that I like and would really love some way to speed up my learning curve.