I have a Skutt model 181 kiln that will not reach temperatures above cone 1
The top two elements were replaced today and after leaving the kiln on high for 8 hours it only reached 2080 degrees. Can anyone tell me if taking the center ring out will allow the kiln to fire to an appreciably higher temp

Permalink Reply by Robert spicer on August 7, 2015 at 7:29pm
I did the paper test and the top two elements didn't seem to be heating up properly so I changed them. I'm at a loss. The bottom elements are working but I don't know of a way to tell if they're working properly or not. I guess I could change the bottom elements also

If the old elements look visibly thinner than the replacement elements, then they would probably read differently on a meter, so replacing them would give you more heat.

I'm sure you have no more than one peephole open - we once had someone at our studio who was convinced all of our kiln peepholes all had to be open for an oxidation firing, needless to say not even our kiln which generates a tremendous amount of heat for its size never got anywhere near hot enough with all the peepholes open - in fact you can close all of them if needed as firebrick is fairly porous.

I've heard complaints from people who've bought new inexpensive Paragon kilns rated for Cone 6, that they don't maintain their ability to reach Cone 6 for long.  Our kiln is rated for Cone 10 which we fire to Cone 6.

You can always wrap the exterior of your kiln in fiber blanket, after which it should reach temperature, unless you have a thermocouple which is not reading the correct temperature - but I assume you're using cones. As heat rises, most of your heat loss is through the lid, so you could first try Cerablanket on the lid.

Just don't cover the control box with blanket as the mechanical or electrical parts are designed to be air cooled.

We were once offered a Cone 10 Cress kiln built in the 1950s and I was very surprised to see it operated on 110 volt.

The interior dimensions were square and roughly the size of our kiln - but the exterior of the kiln was as large as a van. It would have required a hefty forklift to move.  The kiln lid was roughly 12 inches thick with a heavy counterweight attached to a cable like a weight machine in a gym, and the soft firebrick was surrounded by 4 inches of vermiculite followed by thick layers of fire blanket inside a heavy metal exterior frame. It was built like a tank and we were told it took several days to fire and cool down.

So adding extra insulation does work, allowing lower heat output to overcome parasitic heat loss to the environment and still reach the cone 6 or cone 10 limit of the heating elements you're using.

If you look back at posts from last week Maulik Oza has photos of a gas raku kiln they built with a steel frames covered by cerablanket, which is the same concept as this Russian built gas kiln.There's no rule which requires us to use firebrick, or firebrick alone.

A blank ring will definitely bring down the efficiency of your kiln.  Taking it out will allow your kiln to be more efficient and reach a higher temperature.  I would check the resistance of the old elements compared to the new ones you put in.  As elements age, it goes up & they do not generate as much heat and will need to be replaced. Elements that are struggling to output heat make the other ones work harder which means they will fail earlier.  If each element adds its fair share, they will all age gracefully.  jhp

Permalink Reply by Robert spicer on August 10, 2015 at 10:56am
Do you think taking the blank ring out will allow the kiln to fire to cone 6 when it will only go to cone 1 now

I'm sure Jeff Poulter would agree you need a fairly modest change to:

A.)  how much mass and volume you're heating;

B.)  how much heat you're losing over the total exposed surface area;

C.)  how much heat is being generated by older coils.

You could always ask the people at Skutt who designed the kiln if it can support Cone 6 with a blank ring added, and ask them how much a cerablanket on the lid would assist their kiln.

If our Cress kiln were not outdoors, I'd add a 2 inch thick cerablanket onto the lid of our kiln to reduce firing costs, especially as we add a six hour slow-cool onto each firing. Instead I've added a stainless steel cap to protect it from the rain.

It does have a 3/8" air-gap provided by some thin aluminum tubing between the kiln lid and the stainless cap.

When we replace our heating elements, the new elements are visibly 50% thicker or so than the used elements. 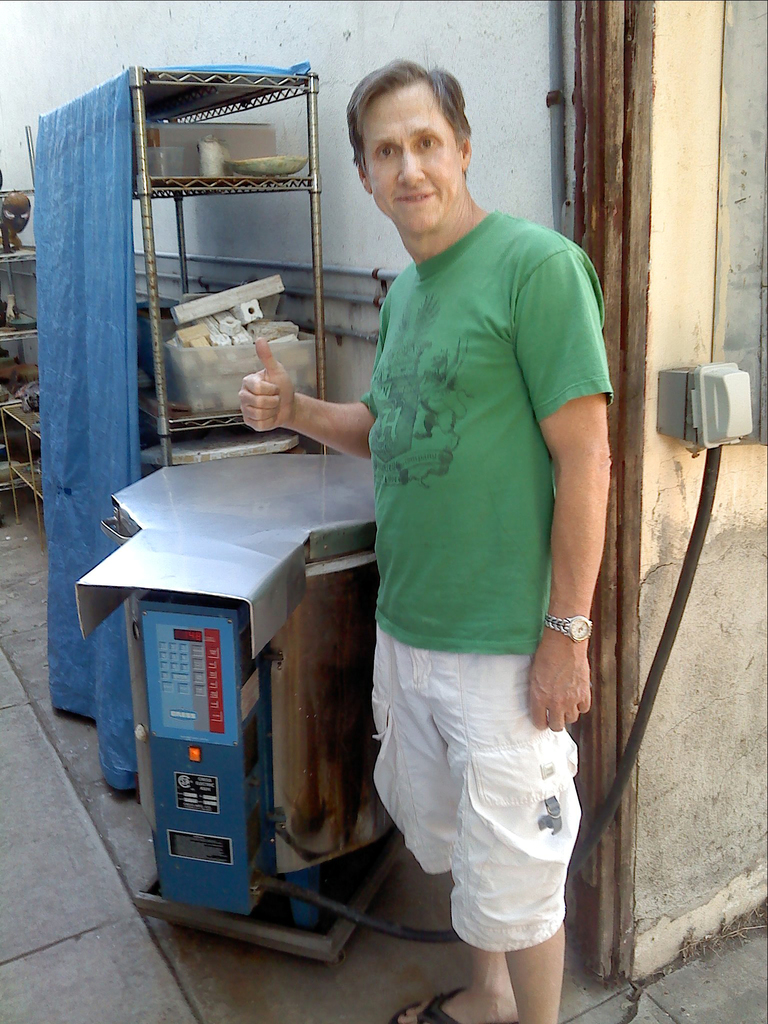 One thing I have done in the past is add an additional top & bottom to the kiln.  I've bought quite a few old kilns and you can set an extra bottom under the kiln(although there's not as much heat loss through the bottom) and set an extra lid on top. that will curb a lot of heat loss through the top but is an extra step when loading & unloading.  Like Norm says, a fiber blank works well also, wrapped around the perimeter and/or on top. I have even closed the peeps in the winter time especially if the wind is blowing and the kiln is struggling, although that does effect some glazes when you keep the kiln closed up like that.  When I'm doing moly crystals, I have to have the kiln sealed up as tight as possible anyways.  jhp

Permalink Reply by Robert spicer on August 11, 2015 at 6:38pm
I looked at a skutt 1227 today that is a cone 8 kiln and it states with the blank ring installed it will only fire to cone 1. I believe that may be the problem. Bit I'm buying the 1227 tomorrow and that will fix everything hopefully, thank you for your help

Cone 8 down to a Cone 1.  That's a lot more difference than I would have expected. Good to know.

Permalink Reply by Robert spicer on August 23, 2015 at 11:31am
M.
I removed the blank ring and fired the kiln and it did I fact reach cone six and shut off
Norm Stuart said: