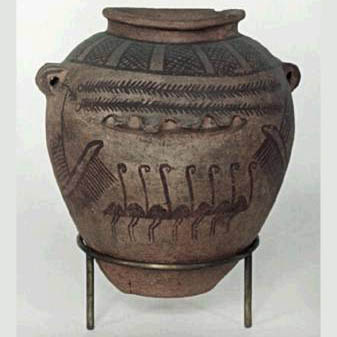 I had not fired my kiln for a few years. When I turn on all of the coils heated up. I cleaned and vacuumed before use. I Put cone 7 in kiln sitter, placed 5, 6, and 7 witness cones on shelf. Set safety timer to 10 hours, switch was set to high fire and the switch at the bottom was set to automatic. The kiln fired for over 10 hours and shut off when the timer hit 10 hours. When I opened the kiln none of the witness cones had bent and the cone in the kiln sitter did not bend at all. My hubby is relatively accomplished with electronics and is about to measure the resistance on the coils. Anything else I should think about. Any assistance would be greatly appreciated.

Ten hours might not be enough time to reach cone 5 depending on the speed of the firing. Without a pyrometer/thermocouple, one way to watch the progress of a firing is to watch the color of the wares through the peepholes. There are color/temperature charts (one is at Lakeside Pottery) you can use to estimate the temperature easily within 100 degrees once the ware becomes incandescent. Firing a new kiln or one that has not been used for some time is not a ''Set it and forget it" proposition. Monitoring the progress is an essential component of knowing what is going on in your kiln. So I would recommend refiring and keeping an organized watch over the progress.

My problem is I have never been actually able to see anything through the peep holes, not even the witness cones. I am also just testing to see if it will fire to the correct temperature before I put porcelain in to actually fire to cone 6.

The hotter your kiln is the more vibrant the color you'll see radiating through the peephole from the shelves and ware in the kiln.

It's not a smart idea to look directly into the kiln, unless you're wearing special lenses to block the infra-red radiation which can damage your retinas.

This pdf file shows you the different colors to expect, and by watching a firing you'll quickly learn to identify each of them.

The two primary components which burn-out and need to be replaced are the coils and the relays.

Watch for five minutes or so as each paper begins to char and burn.  One or more of the papers will not char because the element is not producing heat. If all of the elements which are not working are controlled by one of the two relays, then suspect it's likely the relay than the elements.

Measuring coil resistance can find heating elements which heat, but not as much heat as they're supposed to produce. But in my experience it's not more useful than using strips of paper.

In talking with kiln engineers I've learned that power relays on our Cress kiln are designed to last longer than the heating elements - but not a whole lot longer.  This means we replace our power relays at the same time we rewire our kiln.

During this last cycle my partner ran an experiment, by not replacing the relays when we rewired the kiln. In addition, we replaced broken heating elements one or two at a time as they broke. We won't be doing this again, but we learned a number of things during this 18 month experiment.

2.) In some kilns you can spot these initial element breaks from a longer than normal firing time, which is why we keep a kiln log (much easier to collect information with a computerized kiln controller).  Unfortunately our kiln has so much reserve heat production that the firing time is exactly the same until we lose a third element, at which point the computer stops firing at Cone 01 because the temperature is not rising fast enough.

3.) When we some replaced elements, it wasn't too many firings after that point that many more of the elements needed replacing.  So once one element goes, we now replace the entire $205 set of all of them - about once a year.

4.) In our kiln it's not very sensible or safe to not replace the two $60 relays when we rewire the kiln.  Why? Because the relays didn't last much more than two months past the wire life. Relays can occasionally fail in an "on position" where the kiln does not turn off even when the controller tells them to. Coming back to a kiln which has been constantly on for several days after the firing finished, due to a relay failed in the "on position" is not something I want to experience.

5.) Making replacements piecemeal  saved us less than $70 a year, by not spending part of the $325 cost of elements and relays for several months. For us this was certainly just not worth the resulting frequent firing failures. One firing failure every year or so is enough for me.

6.) Industry manufacturing facilities like a prior employer's oil refineries use preemptive maintenance shut-down schedules to replace aging and worn equipment before the refinery explodes in flames with a failure. Some have other repair philosophies.  While a kiln failure does not create this kind of danger, there's a lot to be said for periodically using the paper test to find the initial heating element failures.

Get the proper ohm readings from the manufacturer.  the resistance varies by coil length.  Amp readings are supposedly more accurate but I don't have the meter to measure maybe your hb has the right meter to measure amps being pulled by each coil under full load.I don't think the meter is cheap.  Paragon gave me the general rule that if ohms is 2 over what it should be then it is time to replace the coil.

Not sure if that will help but I have already told you more than I know. George is right, getting to know your kiln and doing the replacements as preventative maintenance rather than as a repair is cheaper in the long run.  A single ruined load will balance out the 'savings' of using end of life coils and relays.