Can one predict the appearance of a glaze? (part I: The Si/Al ratio)

What do I mean by 'appearance': Will it be glossy, matte, satin matte, stony dry?

What I don't mean by 'appearance': the color, the shade, mottling, floating...

Statement of a scientist: 'At the actual state of scientific foundation of glaze chemistry it is difficult to predict exactly the appearance of a glaze after firing.'

Statement of a potter with -some- chemistry background: 'With some common sense and a basic understanding of the Unity formula (Seger formula) it is possible to have a fair idea of how the appearance of a glaze will be after a well controlled firing'.

I will not go into the detail of the Unity formula as it is well described in literature and on the Internet. Some references:

The straight forward approach to predict the appearance of a glaze is simply calculate the Si/Al ratio from the Unity formula.

As a rule of thumb, at a ratio of 5.5 and higher the glaze will probably be glossy.

What happens if Boric oxide is present in the recipe? Boric oxide is a peculiar ingredient (in the form of G. Borate, Colemanite, Borax frits a.o.) and has to considered as an amfotere but act as well as flux or even as glassformer.

Therefore it is often good to use the SiB/Al ratio -with caution. One can consider that the 'glossy range' using SiB/Al is also starting being glossy at 5.5. -With some approximation.

So far , so good but it remains somewhat limited for a sound estimation.

Better is to plot the Si/Al ratio in a graph using a set of well known glazes with repeatable appearances.  This is well described in Cone 6 glazes by Michael Bailey. I made my own graphs in Excel and use them to document all my glazes.

As an example I show here a plot of glazes from the book Mastering Cone 6 Glazes, R. Roy, J. Hesselberth and from Glazes Cone 6, Michael Bailey. 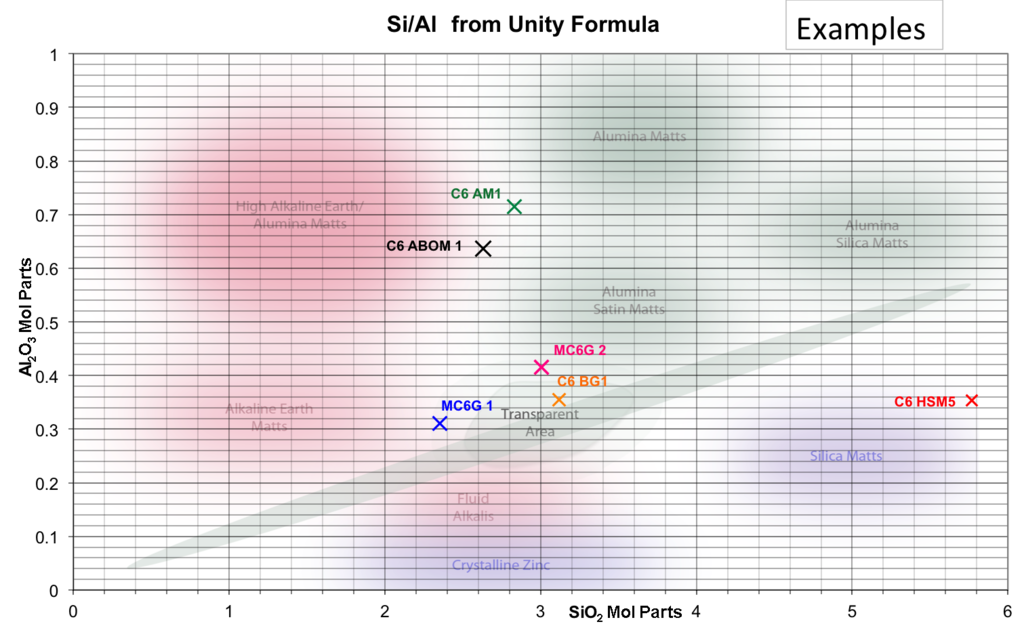 Looking at the graph, one can see that most of the glazes are in the 'neighborhood' of the 'ideal areas' (color shaded background).

The glossy transparent ones fit rather well. Interesting is that the MC6G are rather close to the transparent area. I always found that glazes from MC6G are easily over-fired to what I consider 'real' C6.

For sure this can be discussed in great length but, I just wanted to share this.

In an upcoming post, I will go further on the predictions of appearance using tri-axial graphs using the backbone of the Unity formula: Amfoteres, Glass formers and Fluxes.

Thank you for taking the time to create this discussion,  I will learn so much from you.

Daniel, what is the long diagonal swath from lower left to middle right?

That is the range in which the glazes are glossy (best melt, close to eutectic)

Daniel, what is the long diagonal swath from lower left to middle right?

Thank you for the interest.

Thank you for taking the time to create this discussion,  I will learn so much from you.

When I seen the thread topic "Si/Al" ratios, I had to stop in for a look. Very much appreciate you posting testing information and data on this topic. I often catch heat from other potters because I preach Si/Al over seger unity. Not that I dismiss unity formulation, I just strongly believe Si/Al ratios are the heart of any glaze. Without this formula limit/s, you really do not have a glaze per se to begin with. IMO

Indeed Si/Al ratios are important. But, I think you can have enough parameters at reach when dealing with glazes. It is very complex and one parameter alone does not tell everything. For instance I keep track of Si/Al SiB/Al,  Limits, thermal expansion... and still sometimes I have surprises.

Have you done any experimenting with high purity ingredients? Case in point: Imsil A-25 silica, XL500 french process zinc, or Minex 400 Nep Sy? I do crystalline glazes mostly, anything and everything effects outcome. However, I do mostly c6 oxidation firings, and have noticed great improvements in melt, opacity, and color by using high purity recipes.

Obviously, it is better to use high purity ingredients if the price doesn't matter. I can imagine that it is even more the case for crystalline glazes. The only high purity ingredient I have is a batch of 5 kg CaCO3 laboratory grade because I had the opportunity to get it for free. It also appears that some suppliers are not consistent in the quality they provide.

I have no experience for the compounds you mention, they are probably American. I operate in Belgium.

Permalink Reply by Tom Humphries on October 19, 2016 at 6:50pm
One thing I've realised recently is the power of colourants. I made a base glaze recently that I had tailored the si/al ratio to produced my desired level of shine. Adding 5% copper oxide made a drastic difference on the gloss level.